Dear Diary,
13. Weekly wish.  I'm finding out that many of Sweet Baboo's relatives are getting into running.  That's pretty awesome.  I just wish my sister would start running. Or walking.  I shouldn't worry, but I do.  Both are parents are dead, and everyone in my mom's side of the family.  We don't have good genes.  So, I worry.
12. Superstition. I had a really great race on Sunday, and before the race I ate 2 packages of Quaker instant grits.  It's so funny the way I get superstitious about something like that.  I had a great run, so I was all, Eating grits makes me faster!
(Of course:-->I ignore the whole "training, my ass off" thing and decide, yeah, it must be the grits.)
11.  Non-runners.  Last friday, Sweet Baboo and I were emailing back and forth our weekend running plans.  My last email to him said, "I'm supposed to run 10 miles on Saturday and 8 on Sunday, but I"m going to run a couple extra on saturday since we have that 11K on Sunday.
"I'm not sure why you're running so few miles," he replied.


Now, when I received this there was a young, new therapist in my office, and she heard me chuckle, and looked over my shoulder and read that line.  "What does he mean 'so few miles'?"
"Well, it means that I'm running only 18 this weekend, he's wondering why it isn't something more like 25 or 30," I said.

"That sounds like a lot of miles to me," she said.  And then (you'll love this) she tried to stage some sort of an intervention.  Which was ADORABLE.


See what I mean? Adorable.

"Don't try to therapize me," I said.  "Save it for the kids. I'm comfortable with my obsession."

"Well, as long as you're comfortable," she said, in her very concerned, patient, I'm-wiser-than-you-at-age-twenty-six-even-with-far-less-education voice . 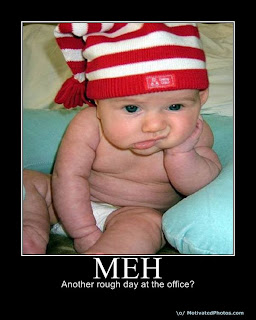 9. Vernacular.  This week it was pointed out that I had put this sentence in one of my reports: Mother reported client's hygiene as "meh".  What did that mean?
"Well, it means that when I asked mom about the kid's hygiene, she shrugged and said, 'meh'." I said. "I put it in the summary."

"Oh.  well, if that's what she said, then that's what she said.  But maybe next time add a translation for the rest of us."
I suppose it is a bit presumptuous for me to use contemporary neologisms in a technical report.  Next time, I'll say something like, "mother indicated that client's hygiene was not bad, but could be improved, either way she was unconcerned."  But "meh" just sums it up so nicely.  There are few words so simple, so succinct, as "meh," don't you think? 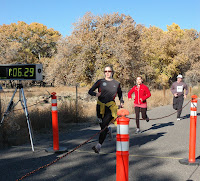 8. Local Races.  Sunday I did a Veteran's Day 11K, a smallish race in downtown Albuquerque.  I wasn't planning on doing all that well, as I ran 13 miles the day before, but I was very pleased with my results.
The funny thing that happened was that in the last 20 yards or so, a woman I had passed a mile or so back was suddenly at my shoulder, pulling ahead.  I didn't even think, I just hauled ass.
WHAT was THAT all about?  When did I start caring if a twenty-something beat me by a few seconds?  What kind of person have I become?

(Oh, btw, after the race, they gave us chocolate milk.  Best. Race. Ever.)


7. TRAINING.  This week, I start ramping up.  I'll be running 40 miles throughout the week. It goes up from there.  I'm getting very nervous about my chances of finishing the Las Vegas marathon under the cutoff.  But I keep reminding myself, I have already done it once, and it doesn't mean I'm not me if I don't finish it.  Still: Nervous.  It's coming up -=FAST=-.

6. NEW INSANITY CHALLENGES.  Marathon "doubles".  I'm now signed up for the Wisconsin marathon, May 7 and the Kalamazoo marathon, May 8.
5.  HILL WORK.  There is this nice, straight street near my house rises 200 feet straight up over about 0.8 miles.  I finally managed to jog up this thing, something I've been wishing I could do since I moved here.  I'm going to make hills repeats part of my run workouts.  I've said it before, but I'll say it again: Hill repeats are the heavier runner's friend.  It's like stealth speed work.  It's at the end of my new favorite 5-mile run.
4.  OTHER STUPID THINGS I MIGHT DO.  I'm on the waiting list to do the 50-miler at Rocky Racoon.  The last time I did it, I had to walk the whole thing and it took me an insane amount of time: like 18 or 19 hours.  This time I hope to do it faster.  At Javalina, which is harder, I hit the 50-mile mark before 14 hours, I think, so I'm optimistic.
3. TUNES. "Sabotage" by Beastie boys.  Best running song.  Ever.  Here, see for yourself:
The song is cool, even though the video is kinda lame.
I got back in touch with this song via the new Star Trek move, which I adore.
Because remember, it says GEEKGRL on my license plate for a reason.
2. FAT PILLS, aka "candy".  Fresh from the dangers of Halloween candy in bowls on coworkers desks, comes Holiday candy on coworkers desks. 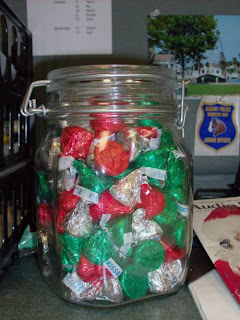 See, there is a woman down the hall from me who sells candy bars.  Good ones.  Reeses, Mounds, Kit-Kat, Almond Joy, Payday.  I deliberately do not bring money to work, figuring that if I get the impulse to buy a candy bar it will be somewhat tempered by the fact that I'd have to walk across the street to Wal-Greens and use my debit card.  Most of the time, this works well.
But open jars of candy bars on people's desks?  Oh, this is bad.  I know without looking that many of those jars will be full of various kinds of Hershey's kisses.  This is bad.  Very bad.  I can avoid the candy if it's not right in front of me.  It's so sad that I'm up in my office, hiding from chocolate
1. WILLPOWER.  But I am determined that this will be different from all other winters for the past 7 or 8 years, in that I will NOT gain weight.  No.  Not doing it.  We are supposed to have a mild, dry winter, and I expect to be able to run the whole time.
...
at November 17, 2010