A race report, with plenty of color. Language and otherwise.

The first "why the fuck am I doing this?" occurred at about 2 am when I woke up to eat. I have two apps in my ipad that I love; one is called Sleep Sphere and plays the sound of rain, or crickets chirping, or wind, or saves, or all of these at once. I pick the crickets and rain. It plays these and when I'm in hotels it totally blocks out the sound of other incredibly loud guests, and I sleep like a baby. The second one is called Night Stand, and it is an alarm clock that allows you to choose a standard alarm or a song from your collection to play.

I am of the belief that In order to awaken one an alarm should be thoroughly obnoxious, and drive one out desperately out of bed to shut it off.

Hence it was that on race day, at precisely two AM the rain and crickets suddenly faded, to be replaced by

SHOT THROUGH THE HEART, AND YOU'RE TO BLAME
BABY YOU GIVE LOVE A BAD NAME 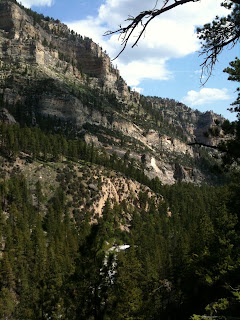 The reason I got up so early is twofold. First, I need time to get in 800 calories at lest three hours before race start, which today was six AM. Second, but bus leaving for the start line left at four AM from Dayton, which was 15 miles from my hotel. One needed time to eat, travel, park, and stand around in the dark cold swearing because after all, it's just not an event without these things, right?

I am usually unsuccessful getting in all 800 calories that early in the morning, but I do my best, eating foods no mortal should ever consume unless, of course, they are getting ready to do s marathon or longer. These foods are available almost exclusively at Wal Mart, which is troubling. 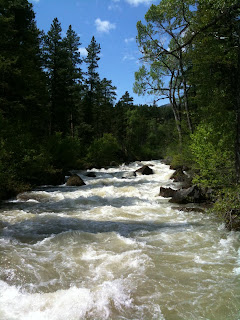 First, I will first tell you that this is the most beautiful course I never finished. It was, essentially, as brutal as Jemez, but with lots of muddy stream crossings thrown in. On the edges of the stream crossings was thick, gloppy, slippery mud. There were long sections of the course that were streams, and no way to avoid it, you just had to splash your way down the running water.

I passed Baboo at about his mile 65 and my mile 8 or 9 or so, and he seemed subdued. I found out later that he was stunned at how difficult this course was, so much so that he wanted to stop me and say, don't go down there. Just don't. Drop out and come finish with me.

But, he didn't, because he's all about letting me spread my wings and shit.

I love him for that.

And when I say down, I mean DOWN. There were sections that went on for a mile or more that were tantamount to descending a flight of stairs, and with each step my heart sank because I knew the brutal truth; this is an out-and-back.

I made the first cutoff, but just barely. I probably would have made it sooner but I was acting likes an idiot, exclaiming over how the flowers smelled, etc. And taking pictures. But what else is there? I'm not trying to win the thing.
When I got to the aid station, they told me hello, checked me off, and said I had three minutes to get the hell out. Well, they didn't really. They just said get out. The aid station closed at 10:30, and I got there at 10:25. I had five minutes to use the bathroom, get my drop back, change my socks, fill up on water.

That part was important, because there are large portions of the course where the aid station is natural spring water flowing through a pipe in the ground. But I don't do well when I'm rushed, and I just did the basics, and took off my jacket, because everyone I'd seen coming back up the hill was pouring sweat.

That, it turned out, was a HUGE mistake.

Whenever I crossed the face of the mountain, I was FREEZING. but I survived, very much alone there at the back of a the pack (hello, old friend). However, I would occasionally round a corner to be confronted with yet another wall of trail fifteen percent grades rising up, up, up in front of me, and my cheerfulness was starting to flag, just a bit...when another climb presented itself I would just mutter, You have got to be fucking kidding me.

Interestingly, Sweet Baboo told me he was thinking just that same thing many, many times.  But I'll let him tell you about that..

By the time I came up on mile 27, I knew the truth. I had 75 minutes to travel 6 miles. My 10k PR on a flat road is 61 minutes. These six miles included lots and lots of climbing. It wasn't happening. I sat down at mile 27 and said, I'm done, and I want a ride back down the mountain. I caught a ride with a search and rescue guy driving a Toyota f2 and to give you and idea ofmhow rugged this course is, it took his truck an hour to traverse the six miles of road that I would have traveled on foot.

I went back down to the race finish and ate and waited for Himself, the Baboo, who finished his 100-miler in about 33 hours. For the runners there was charbroiled hamburgers with all the fixin's, and brats.  Baboo finished in about 33 hours.  He was stunned and dazed at how hard it was, harder than Leadville, he said.

We drove back to the hotel and slept well. The next day was a free ham and pancakes breakfast during which the following occurred, and this is my ONLY complaint about this well organized course: they were utterly confused over the times:


It took them, I shit you not, two hours to give out awards.
At the end of ninety minutes, we were desperate and afraid of missing our flight, so we asked for Baboo's buckle early, which they cheerfully gave. Then, we drove back to Denver, stopping at Starbucks and Taco John's along the way.  Once at the Denver airport, my WeightWatchers app
(I've been on a break from WW for a few months) informed me that I'd taken in 64 points by 5 pm.
Ulp.Time to get back on track.
PS The awards, if you're reading this and so inclined to go for your age group, are stones that have the awards etched into them.  Big old river rocks, about 10-15 lbs each, just right for you  and your luggage.

IF YOU GO: I adored Sheridan. We stayed at the holiday inn, where the bed was comfortable. Within walking distance to the hotel is Albertons, WalMart, a super buffet, nail place, and Arby's.  The all-you-can eat buffet had free wi-fi, which was almost the perfect storm (they didn't have mocha lattes).   There is a nice running trail nearby that is only a few miles long and cement sidewalk, but very pleasant. The race start is fifteen miles away, and there was a shuttle that took you to it, although we chose to drive.

There are also hotels in the town where the race starts, but the packet pickup, preface meal, and drop bag drop off are all in Sheridan.

A word of warning: This is not a race for beginners. To convince you of this, here is the profile of the 27 miles I finished:

NEXT UP: assorted 10ks around town, and the LaLuz trail run the first of August, which traverse over nine miles from about 6200 feet up to 10800 feet to the top of Sandia Peak.

Email ThisBlogThis!Share to TwitterShare to FacebookShare to Pinterest
Labels: beautiful places I get to run, race reports