PART 1: Sun Comes Up
Javalina Jeadquarters is a party.  If you ignore the suffering out there on the trails, you can delude yourself into thinking that the whole thing is a giant party, and you're all, YEAH!  HELLS YEAH!  I'LL RUN 100 MILES! completely forgetting that the party is happening amongst the crews and support staff--not the runners.

So.  I had originally gone into this race preparing for and training for a 100K.  Somewhere along the line I got a little lost and began thinking that I could do 100 miles.  I mean, It's just 40 more miles, right?  Right?

Well, anyway.  At 6 am, like with a lot of ultra run 100s, the clock starts with a countdown, and everyone counts down from 10, and then there's an air horn, and you're off!

The reason I had picked this race is that the terrain and trails are very much like the ones behind my house.  Same type of elevation gain and loss.  Same kind of rockiness in spot, and smoothness in other spots. 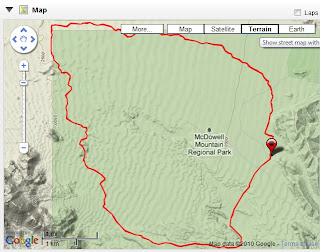 The Pembertonrail is a 15.4 miles loop.  You do loops 1, 3, 5 clockwise, and 2, 4, 6 counter-clockwise.  The final 9 miles is clockwise but then about 5 miles into it, you take a 4-mile shortcut trail back.  There is an aid station every 5 miles, and that shortcut is carefully guarded by the "Coyote Camp" aid station.

The first loop was easy.  Well, of course it was.  I came in conservatively, about 3:45, and then left the aid station a little less than 10 minutes later.  The sun rose, and the sunrise was glorious.  We were blessed with a rare, cool, partly cloudy day.  While there were some instances of nasty heatness when the clouds moved away from the sun, for the most part it was in the mid to upper 70s, certainly bearable.

I had a great, energetic mix on my iPod.  I used my iPod as a hydration marker; the beginning of each song was a reminder for me to take several swallows of Gatorade or Succeed from my hydration pack .

My second loop, too went well, but I learned to hate the counter-clockwise loop, because it's a long, steady climb, almost imperceptible, but a climb none the less, that goes up for about 7 or so miles, levels out with some short, steep rollers for a few miles, and then about a steep, rocky 2 or so miles downhill, leveling out for the final 2 miles or so.  I much preferred the clockwise loop with it's short, steeper uphill, and then rollers, and then gradual downhill.

I wore a loose, wicking, white shirt, in order to keep me cool during the heat of a day.  After loop one, I put on a "Sun Day Afternoons" hat that shielded my face and neck from the sun.  I wore a pair of compression shorts by "Moving Comfort" and a bra also by them, which generous amounts Sportslick.  I wore Victoria Secret "Body By Victoria" underpants, which may seem like a strange thing to tell you, but they have no elastic parts to chew into you while you run.

Down below, I wore white compression leg sleeves and Injinji socks, not the bamboo natural fiber kind, because they are shit. I wore the nice, thick athletic ones, which I rolled on over toes with lots of Sportslick.  Because there really wasn't much actual steep climbing, I wore my street shoes that were  the most comfortable.  I carried a Nathan pack - I'd really wanted a "Go Light" pack but I couldn't get one in time for the race.  My pack had two containers with E-caps and SportLeg capsules.

Sweet Baboo, of course, was dressed as Elvis.  His costume was wildly popular, and he was running easy, as his costume is actually specially made by a woman who makes running clothes.  I don't know how he felt, but I got kind of tired of people doing that pointing thing and saying Elvis-isms, such as "thank you.  thank you very much" and so on.

Javalina Jundred is also a costume party.  I was startled toward the end of loop 1 when a woman, who appeared to be nude, came running toward me, wearing an odd hat.  I saw her several times, before I realized she was wearing a bodysuit.  The hat, Baboo finally told me, was a birthday cake.  Thus, she was wearing her birthday suit.  It was a near match for her skin, with little shadows artfully applied here and there.  Clever!

Things that worked well for me on the first two loops:

1) The long downhill runs that Coach Baboo had me do once a week.  These built up my quads, so that even after the rest of me took a beating, they are barely stiff.

2) The self-imposed 2-3 mile runs up the hills near my house, along with the dually-imposed 50k runs and sprints I did.  These helped built up my calves.  They, too, are barely stiff.

3)  Every 5 minutes, I took 3-4 big swallows of Gatorade.  Every hour, I took 2 e-caps and 1 Sportlegs.  I stayed hydrated without getting too full.

4) My crew kept me loaded with real Gatorade or Succeed, since it was really diluted out at the aid stations.  What the hell is up with that?

5) Courtney, who crewed the first 2 loops, was a newbie at this,  but she was magnificent, and she had a blast.  She set up a station close to the in-out area and had stuff ready for us.  She ran to get things.

She would hand me things and I'd say, "what's this?  why do I need this?" and she'd reply, "it was in your instructions."  Oh.  See?  You need a crew.  You can't think your way through this.  At the least, you need to have bags set up for each leg or loop with strict instructions for your tired, delirious self.

6) I had a 1000 calorie breakfast that consisted of high-sodium, simple carbs.

Things that didn't work well for me:

1) The cold that I'd been fighting off going in.  Or allergies.  Whatever they were.

2) I continue to be plagued by shoes that insist on arch supports.  I don't need arch supports; as I have flat feet.  The result, after 25 miles, is a hot spot on the inside of my foot that gets pretty painful.  I had it taped twice, which helped.

3) The fact that, in all honesty, I wasn't trained for distances much further than 60 miles.

All in all, I had a good couple of loops.  My hopeful plan was to get in three 4-hour loops, followed by 5-hour loops, which would get me to the 9:30 cutoff to start the final half loop.

My feet were starting to ache a little, but I expected that.  I felt good, I felt hydrated.  Sweet Baboo would get me stuff from aid stations like a nutella sandwich, to entice me to eat.  I just wasn't hungry, but I was eating sports beans, lots of Gatorade, and had eaten two peanut-butter-and-jelly sandwiches, some potatoes, and even a couple of gels (gag).

Coming into the end of loop 2, I felt good.  I got my left foot taped in the hot spot on the inside of my foot, which instantly felt better.   I headed out loaded for bear, ready to do this thing.  I put the idea of mileage out of my mind, and just focused on doing what I had done one more time, and then one more time after that.

Eventually, though, the sun has to go down, and that's when things can get very dark.