The saddest thing, ever. A race report. 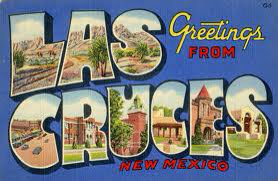 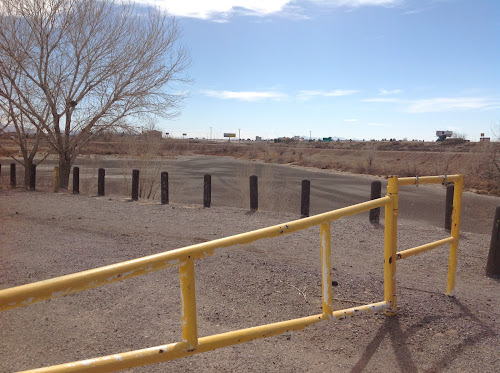 This is Burn Lake.

Burn Lake is in Las Cruces and it was formed while they were constructing I10 through there--they were excavating dirt for building overpasses and hit the water table, and hole started filling up. No word on what they planned to do with that giant hole--maybe it was slated for a runoff pond for flooding but in any case, the lake formed, and according to Google maps, at one time looked like this (below). 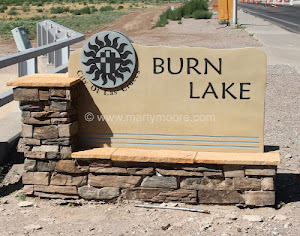 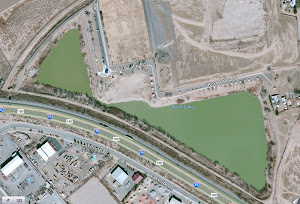 The lake was used as a runoff pond, and had no outlet, and there are lots of farms around here, so around 2006 or maybe before, swimming was banned due to high amounts of e. coli found in the water. They built soccer fields around it, meanwhile, and lots of picnic shelters.

Then within the last year or so, it just dried up, they said, due to the drought. But you have to figure, this means that the water table in Las Cruces has dropped twenty feet of more. Such is the case when you move in a bunch of gringos who insist on having green lawns in the southern Chihuahua desert.

Srsly, the saddest thing ever. No swimming, y'all.

Te El Paso marathon, which I did last weekend, is also just the saddest thing ever.

First, it's E Paso. Sweet Baboo spent this weekend doing health screenings on lots of guardsmen and women who live there, and not one person he met likes El Paso, even ones who were raised there. Even on a Sunday afternoon, the place seemed lacking in human activity in the downtown area. It's flat, it's dusty, and the wind blows constantly--it doesn't have the romantic charm of, say, Santa Fe, 300 miles to the north. It makes Albuquerque look like a lush, tropical paradise.

The marathon itself is okay. It's a point-to-point, and they bus you to the start line. It's well organised in that respect. What makes it sad is that in El Paso, a city of over 600,000 which may, or may not, include the very large Ft. Bliss and bedroom community to the north of Lac Cruces--only about 400 bother to sign up for the full. Anyway, they bus you to the top of the mountain and about sunrise you start running down the mountain. The first five miles are spent running downhill, and hopefully you've trained for this so that your quads aren't blown. Then you make a few turns, and around mile 9 or 10 you start running on this runway looking thing, I think someone told me that it's a highway for tanks. The next ten miles are straight down this thing into a headwind that is picking up speed. I couldn't run against this, I just couldn't. But this is why I do racewalk training, so I started doing that, passing a few along the way. Then you're on post, running through the base, and around mile 19 you turn and leave the base and for me, that's where it got very interesting.

When I left the tree-lined shelter of the base, I ran into a dust storm. It picked up until the wind was roaring past me. I walked with one hand holding my hat, one hand in front of me in a futile effort to block the sand, and occasionally looking up to make sure I was going in a straight line.

Now, there are no course markings. Instead, there are El Paso police posted at every intersection, and they stop traffic and also point the way. They did a terrific job keeping traffic away. The aid stations, after mile 16, were every mile, which was important because I was counting on that since I didn't have a bottle. By mile 20, though, the cups of water and gatorade were in boxes to keep them from being blown away, but still had a fine, thin layer of sand in them. It couldn't be helped. 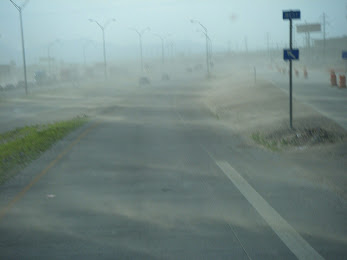 Around about mile 22 or 23, a van pulled up next to me. It was full of runners, and the driver asked me if I wanted a ride. Then he said something else that I couldn't quite make out over the howling wind, but I just shook my head. I wanted to finish. He gave me a strange look and lingered for a moment, and then drove away. I continued on, blocking the sand and wind and then...

What the guy had been saying to me was that they were shutting down the course. I didn't hear that part. I stood on a street corner in downtown El Paso, waiting for traffic, and looked around, and there were no police, no aid stations, and of course, no course markings. I continued down the street, blocking the sand from my eyes, following empty sports gel wrappers too stuck to the road to blow away.

Now, around about this time Sweet Baboo, Bones, and Miki (who had finished between 3:30 and 3:39) were in the stands, waiting for me, when two motorcycle officers escorted the "last" runner in...and it wasn't me. My friends and Baboo looked at each other. Where was she? They asked one of the police, who informed them that there were a couple of runners out there who had "refused" to take a ride, "but they're miles away." Baboo asked him what their bib number were. "Bib numbers? I don't know." He got the car and went looking, and as he told me later, was immediately lost.

Eventually, the gel package trail stopped. The streets were deserted save for one shaky-looking couple walking towards me, the man carrying a large stick. "Hey...any chance you guys know where the finish line is for the marathon?" I shouted at him over the wind.

He walked up very close to me. "Oh, wow, man, I think it's over by the bus station, man," he waved his arm towards the central part of downtown, and then held the stick out towards me. "You better carry this, man, there's a dog down there that wants to bite you on the leg." He gestured towards an empty lot where I could see no such animal, but I took the stick, thanked him, and continued on my way.

I ran across a bridge over a highway, and then stood on a corner for a while watching traffic go by. I had misgivings. Then I turn and went up a hill towards a park, hoping to be able to see the convention center from there. I asked a man walking his dog, the tiny dog nearly blown off the sidewalk by the wind. "Oh, my goodness, let's see..." And began turning in circles, scanning the city. Well, shit; I can do that. I left him there and continued up the hill. I found myself standing on a corner waiting for the light, and next to me was a man in dusty clothes, scraggly beard, carrying a ragged backpack.

I asked him. He was surprisingly eloquent, "why, I believe, yes, I believe it is over by the bus station." He waved his hand in a southwesterly direction, back down the hill, so went back down again, crossing over the freeway and heading west.

Eventually I encountered a woman trudging up the hill, wearing her finisher's medal. She looked startled to see me, being as she was the "last" finisher. She pointed, and I ran down the hill and turned left, and ran into Miki. Now I was just pissed, and didn't feel like running any more, but sure happy to see someone I knew. It was well beyond six hours since I'd started, so when I came to the finish line where the tracking was being taken apart, I kicked it over and then went to sat down and asked for my medal. It didn't seem of interest to anyone working that I had finished and was accounted for. But a very nice man with a beard got me a medal, and miki brought me some water and chocolate milk.

Miki got on her cell phone and contacted Baboo and Bones, and they drove over to pick us up. Baboo hugged me tightly. I gazed into his face and said, "get me the fuck out of this town."

In case you're wondering I did get a gracious letter of apology from the RD. It was just a miscommunication and a comedy of errors. He's going to take steps next year to make sure It doesn't happen again. I had to guess my time, so I was added to the list of finishers with a time of 6:10. Not a PR.

Oh, and did I mention I had woken up that morning with a headache AND a cough?