And in this corner...graduate school.

13.  So this past weekend, I ran 17 miles (half what I was supposed to run), but also cleaned out my closet, got my car cleaned and detailed, and made serious headway on my assignments.  I took my daughter out to eat.  I taught her how to play Sudoku.  Sweet Baboo was gone, so I had to keep busy.

12.  Monday, I took a huge load of clothes - eleven items - to the dry cleaner, and then took another armload to Goodwill.  I did not run.

11.  Also, on Tuesday, one of my references for the Internship notified me that they'd been called.   Tuesday was also the day I got my butt up at 5 am and went for a short run.  I decided that I will not run unless I get it out of the way early.  When I say "get it out of the way" don't assume that it's a chore, it's not.  Running at dawn is my joy.  It's quiet.  I don't wait for cars.  I. Feel. Awesome, for the rest of the day.  I take off in dark, and it's just before sunrise over the mountains when I finish.

10.  Wednesday, the daughter project took an unexpected leap forward when she was called to an interview.   I did not run.


9.  I'm so over this semester.  It's like, whatever.  Grade me, don't grade me.  I don't give a shit. Last night, I did my last role play.  EVER.  This will be the last time that I sit with another student and do a therapy role-play scenario.  Buwahaha.  FOREVER.

8.  OMG, I just realized.  I'm running the first of my four marathons in less than 3 weeks.  I have not been able to keep up with my training.  This is going to hurt.


7.  Sweet Baboo, as I mentioned, was gone this week.  It used to be that when this happened I would stay up too late, fall asleep in front of the TV, drink too much wine, and do too much online shopping. Now I've substituted cleaning and arranging for all that.  But I'm still waiting for him to come back.

6.  I went over to a grocery store to celebrate the good stuff.  I picked out a bottle of wine, and some chow, some cake, and then attempted to buy. I realized I didn't have my wallet with me, so I grabbed a spare license that I keep in my car.
The kid who checked me out, who was barely above 21 himself, informed me that my license was expired.  (Yes, he carded me.)  And that he could not sell me wine.
Are you kidding me?  Fine.  I don't need your stupid wine.  In fact, I don't even need this food.  It was all an impulse, anyway.  (More on this later).
I do not, by the way, have any illusion that I look like I'm under 21.  I think he was being just a pain in the ass.
So, I went home and had some fish.  And ice water.  And I was just fine.


5.   I'm not saying I don't occasionally eat a lot of crap.  I'm just making an observation.  So, when I'm at some thing at work where there is a potluck, and they say, "okay, everybody eat," I find myself stepping out the way so that I don't get trampled.  I find myself, too, standing next to the exact same people each time.  These are also people who are into fitness and working out, and we make small talk as we watch everyone jostle for space in line.  It's another odd club that I've become a member of: the club of people who have decided that work food, especially potluck food, tends not to be health food.  These are the same people with which I will split a bagel, or a donut, during meetings.  Do I want the whole donut, or three or four?  Hell yes I do. But I also remember how bad I look in stretch pants. 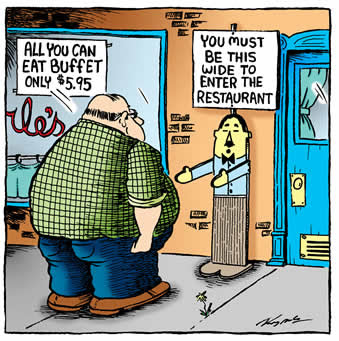 They stand in line, and I immediately recognize what they are doing: looking anxiously back and forth between the number of people in front of them and that one dish that they want some of, gauging whether there will be any left when they get their turn.  I know, because I've done it.
C'mon.  You know that, along with m, you' had those ugly, ugly thoughts: you better take just a small helping of those sour cream chicken enchiladas, bitch, or I'll slash your tires.


3.  All I have left for coursework for my MSW is the following: one family film assignment, where I watch a film (I chose "Parenthood") and then write a paper about how I would approach working with the family from a particular theoretical orientation; one clinical supervision plan, a paper outlining a proposal for a group for my Group Therapy class, a 30 minute presentation where I treat the class as a group therapy class and work them using some sort of intervention, and then the final exam for one class.  That's it. It sounds like a lot but I've already started on most of these and/or done a lot of thinking.  The next two weekends will be spent working on these so that by the time the marathons roll around, I am done and relaxed and getting lots of sleep.
Of course, there is absolutely no reason for anyone to give a shit about any of this. I'm mostly thinking on paper.

2. But I will also say this: I see and end. I can actually now see a place on my calendar, when I'm looking at a multiple week view, when all the entries for assignments, classes, etc., abruptly stop, and there's just space there . That's what I'm looking forward to: space.

I've been in school a ridiculous amount of time.  I started my Bachelor's degree in 1991 and after I finished, professors convinced me to get my masters, so I did. Then they convinced me to work on my PhD, so I moved to another university and started that. Then I decided that I didn't want that PhD and moved in wiht Baboo and started teaching.  THEN, I decided to start another PhD program. I didn't like that either, so I got another master's degree.  And then I decided to get another one after that.

Thankfully, the finish lines I'm pursuing now are cheaper and less stressful.  No more degrees for me, I'm done.  Since I've been in school continuously since 1991, I'm not sure what that's like.

Of course, only my coursework is done.  I have 9 months of internship to do.

Which brings be back to the internship at the VA that I applied for.

1.  I mentioned that I was applying for an internship at the VA.  This was a source of anxiety for me because well, stupidly, it was the only one I applied for, and it was highly competitive.  It is one of the few that provides a stipend, but that's not why I wanted it: I want to work for the VA some day.

I like working with people, all kinds of people, and I believe in the mission of the VA.  I spent 10 months there in 2008-2009 working for a contractor, and loved the campus here. The atmosphere is relaxed but professional, and the VA has a lot of different areas for a social worker to work in, and they are highly structured, which I love.  They provide good support for continuing education for their clinical staff.

They also use only researched, evidence-based methods of working with people, and that's a good fit for me, as Albuquerque has it's fair share of flaky counselors social workers who truly believe that rules, ethics, and theoretical orientation don't matter as long as you have good intentions. And, of course, a very big wad of icing on that cake is that it is a steady job, with good benefits.

An internship there gives me the chance to get my face in front of people, so that some day when there is an opening and I apply for it, somebody says, I remember her as an intern. She was reasonably competent, and didn't start any fires.  We should hire her.

Oh, but did I mention?  They called me yesterday, and offered me the internship.