What happens in Vegas, gets posted on my blog.

Dear Diary,
This was my weekend: Marathon Double #1.

Well, Friday we got up at the crack of "Oh, my god" and jumped on a plane to Las Vegas. We hit the rental car place, and were calling up Isaac/Fomula-ic for brunch.  He and JT met us at a place called "Hash-house a Go-Go," which bills itself as serving "twisted farm food", and where I had this concoction: 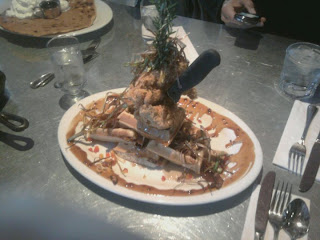 Look carefully.  This is a stack of belgian waffles, into which bacon has been baked, and then topped with two fried chicken breasts, and then fried leek on that, and then for some reason, a knife is plunged into the whole thing.  The brown stuff around the outside is not maple syrup, it is "a hot maple reduction," which Isaac said sounded sexy, and I agree.  I can imagine it in a novel:


He walked toward me, wearing nothing but a hot maple reduction.
In any case, I had two of the waffles and a chicken breast for breakfast, then boxed up the rest and gnoshed on it over the rest of the day. The waffles were good, the chicken was meh. I'm from the south.  I'm picky about fried chicken.  We then headed over to the Las Vegas marathon, which was nicely organized, and picked up our packet (it seems the larger the event, the skimpier the packets get) and seriouslylame chwag, which consisted of advertisements for different races (I got 5, 6, 7 of some of these--someone got lazy, or pissed, or something) and a couple of samples.

Then we headed into the expo, where I bought:

Then we hit the road and headed for Death Valley, arriving late afternoon at the Furnace Creek Ranch where, we were proudly told, we could avail ourselves of the 'runner's special' wheat toast and fruit OR a cup (not bowl, cup) of oatmeal, for $8.50.

The rest of the night, well until around 9:30 or so, consisted of me being awakened every 15 minutes by the outside door slamming shut.  Our room was right next to it, so every 15 minutes, or oftener, I'd hear click-SLAM!!  click-SLAM!!. I did not get much sleep.  But hey, who needs sleep when you're going to run 26 miles from Nevada to California? 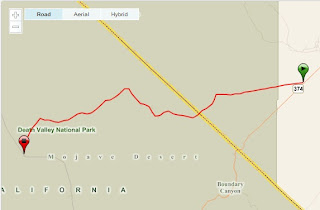 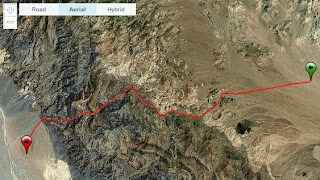 I ate my favorite chinese noodle bowl for 75 cents for breakfast pre-race.  Who needs $8.50 oatmeal?


For some reason, after 22 years, this race is pretty disorganized, at least pre-race. Once they get you on the bus, it's all good.

For instance, Sweet Baboo had signed us up at the same time, but the I (and only I) got threatening emails saying that I'd better sign a waiver and fax it back--or else!


Or else...you'll have to stand in the late registration line!


Since I. Am Lazy., I decided to take my chances, and you know what?  The "late registration line" was much, much shorter than the line for people who were registered. So there.

When you pick up your race bib, you have to pay $10 park fee.  Not sure why that can't be part of the race entry fee.

Buses took us to the start line, on the other side of the mountains in Nevada, at about 3800 feet.  Here's a profile of the course:

The seasoned runners among you look at that long downhill and wince, knowing full well that it is not the gift you think it is.  I worked on hydration and such, but I use songs to cue me, and no headphones are allowed on this course, so I ate a gel every half hour, and drank from my hydration pack every half mile.

I met Kelly, who overheard me telling someone I was from New Mexico, and asked me if I wrote a blog, and I said yes, and she introduced herself, and then, well, she was gone.  She hauled ass up that hill!

The first 8 or so miles were a long, steady uphill, and , well, BOOOO-RING!  I got slower and slower, until we got into the more serious climbs.  It went from 3800 to 5200 feet over about 10 or so miles, drops down again, and then climbs sharply up to a view that is amazing, and everything after that is pretty amazing.

In any case about mile 10, I was marching up one of the hills, watching the people way, way ahead of me (who I passed, later on) and another runner asked if she could run with me.  So I said, sure.

Nancy, as it turns out, is a Marine, stationed at Camp Pendleton.  She was wearing a sign on her back that said, "in honor of" and it had the picture of a Marine and his name.  She told me about how he was killed, while trying to save other Marines, and how he was awarded the silver star postumously.  He isn't a relative.  I'm not sure if she actually met him, although she may have, but that wasn't why she was doing the marathon in honor of him. It turns out, I found out later, that what Nancy does is runs marathons, and every time she runs a marathon, she does it in honor of a fallen Marine.  She then takes her finisher's medal and gives it to the Marine's family.  She figures it's the least she could do.

Nancy was in the air force for about 10 years, but always wanted to be a Marine, so she switched over a few years ago. For those of you that are not in the know, the Marine Corps basic training is 16 weeks long, and it doesn't matter where you come from, even another branch, you have to go through it.  She knew this going in.  I knew about it from my very, very favorite Marine: Sweet Baboo.  Nancy, she's had a lot of interesting experiences, as one might imagine, and at one point told me I'd have made a good Marine, which I took as just about the highest compliment I've been given.

Nancy told me later that she was pretty happy not to have to run with what she referred to as silly, or snobby, or borderline-y type chicks.  I was, too.
Ooo-rah! 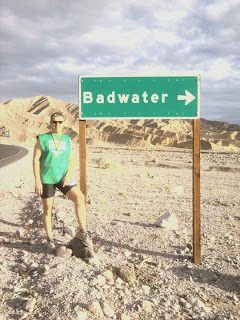 About 4 hours into the race, I told Nancy "My husband is probably finishing now," but I was so wrong, because he actually finished in 3:40.

﻿﻿ Nancy and I ran a good steady pace down a long winding trial through Titus canyon. 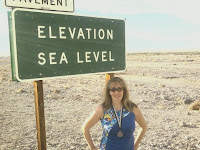 Finishing time: 5:43ish.
Sweet Baboo was waiting for me at the finish line.  We gave Nancy a ride back to her car, and then took off for Las Vegas,
(with a brief stop at Carl's Jr.)


It was. total. awesomeness.  And I did indeed eat all i could eat.

We got up in early morning meet with the rest of the running Elvi over at the Shark Reef.

Now, last time we did this in 2007, the running Elvi and the couples who are getting married at mile 2.5 were put in the front corral, and led the race at the beginning.  After all, it's Vegas, right?

But then, well, the Rock 'n' Roll people took over the race, made it bigger, and slightly less interesting.  When we made our entrance, we came out to an empty area.  Then they made us go wait with everyone else, before finally sticking us in coral #14.

Sweet Baboo and I headed for the Venetian, where the wedding ceremony took place.

All the brides got a little boquet.

The ceremony was surprisingly sweet.

We both got a little verklempt.


Then we kissed goodbye, and Baboo took off to do a 4:13 marathon, including the ceremony.
I did a 3:00 half marathon (including the ceremony) and suffered the whole way.  But I got medal #2 for the weekend, and the suffering didn't start until around mile 10, when my legs said, are you fuc#ing kidding us?

After the Las Vegas marathon, we gassed up the rental car, hit Subway and Starbucks, and then headed for the airport, where we had Cinnabons.  We were back in our own beds by 9:30 pm.

This morning, I hurt, hurt, hurt.  And hurt some more.  Himself hurts also.  I rode the elevator at work all day.