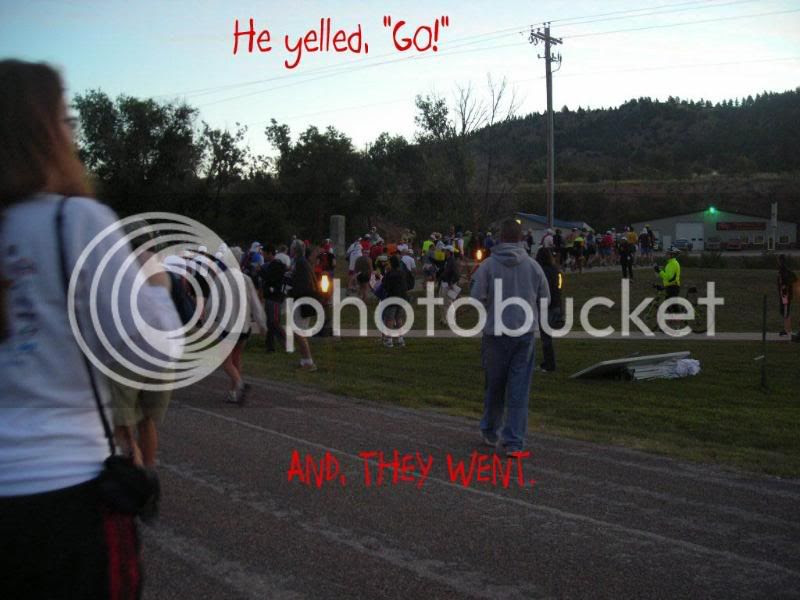 Ultramarathoning, in case you didn't know, is all about you, the runner. You have to get your own satisfaction from the experience, because there's little cheering or fanfare.

It's very low key; with the finish line being a small banner hung from a couple of poles and sometimes, no banner at all, just two cones.

I saw one cowbell on the entire 100-mile course. There's no medical tent with bags of fluid. There are occasionally medically-trained personnel, looking for danger signs, but they are mostly at the finish, I think.

There's much less spandex. Very little horribly expensive equipment. It's all about comfort in ultrarunning.
At the race start, the 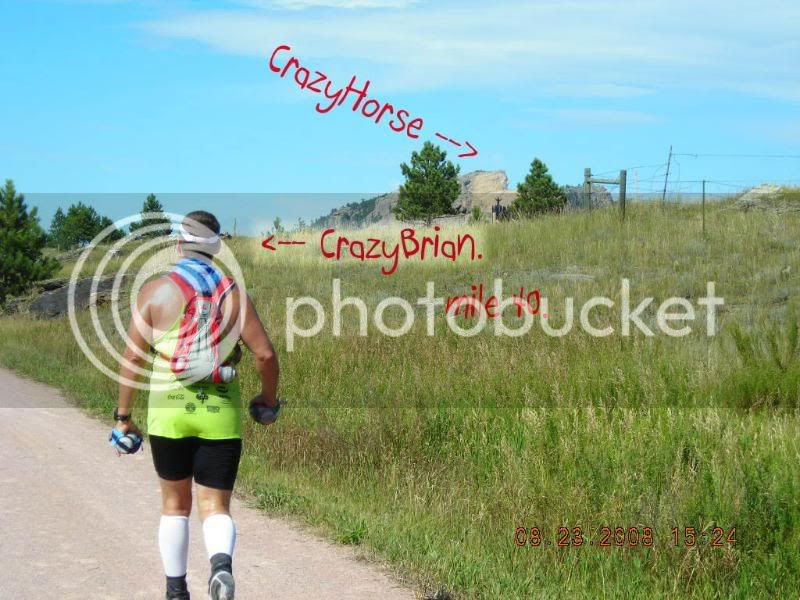 re's no loudspeaker, no cannon. No motivational rock music. Few people seem to know what's going on, even when the start and finish are right next to their houses. At 6 am, or thereabouts, someone usually shouts GO! and, well, you go. Aid stations are usually well-stocked with high-glycemic foods and drink and lots of electrolytes. They are frequently between 5 and 15 miles apart. In this race, they averaged 5 miles apart.

There is usually fantastic scenery, which is good, because there are no cheering crowds. After a while, though, you're just looking at your feet, and the ground, and you miss the scenery. 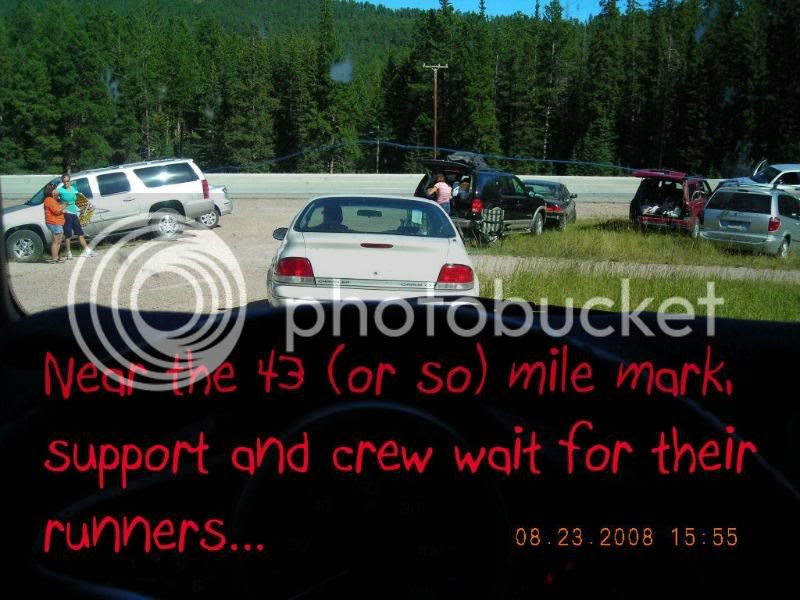 Yesterday, there were enthusiastic, attentive families until it got dark, and then they pretty much disappeared, leaving their runners alone in the dark when they most needed someone to be there.

That's another thing. I was often asked about the progress of, "my runner." As in, "how's your runner doing? He feeling better?" 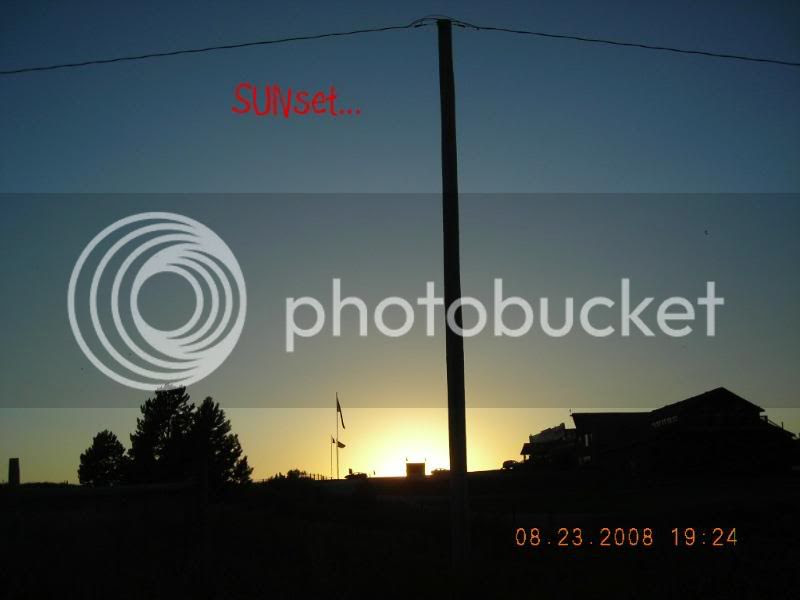 cheerleader. I just sort of ineptly call out, how ya doin'? and smile and try to remember things that people have said to me that made me feel good, but I can't quite pull it off.

I'm mostly busy being horrified by the hobbling and wincing and gasping and the puking going on around me. It's heartbreaking, watching people suffering at mile SIXTY and wondering if they have what it takes to rally for ANOTHER FORTY MILES.

So then you have to say, something, anything, and what on earth can you say?

"Gee, just slightly less than a marathon left - take it home!"
Not. so. much.

No, the only thing I could think of to do was to just chatter about things that had nothing to do with the race, or were tangentially related to the race.

Baboo took good care of his nutrition. He was well hydrated, took in plenty of electrolytes. He drank and ate well, including PowerBars, Accelerade, Nuun, and ready-to-drink meal replacements (in this case, French vanilla SlimFast). Couple of salted nut bars rounded out the experience.

He had a bit of stomach upset around mile 50, but not as bad as the guy I witnessed throwing up at least 4 times. After Baboo came back from the turnaround, I walked with him to the next aid station (pacers were allowed on this course) and got the car and drove to the next aid station, where I walked out to meet him, and he was running again. He ran well until around mile 80, when the blisters started.

Then there was that time when he stumbled back and lost his footing, rolling into a small ditch. It wasn't a hard fall, but how hard does it have to be when you find yourself lying on the ground after running 87 miles? You still have to get up, get back on your feet, and get moving. Every little thing, after 87 miles, is a very BIG THING. 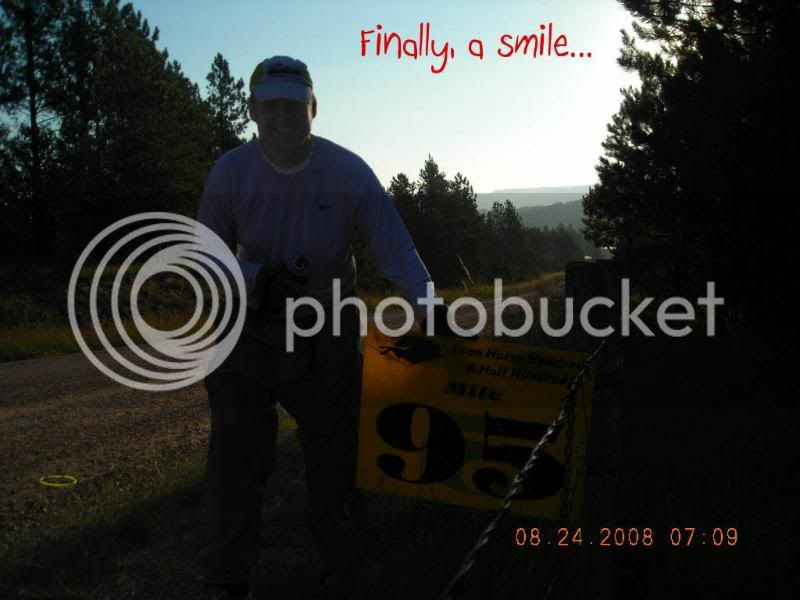 Baboo cracked nary a smile in the last 20 miles, at least until we got to the giant yellow 95-mile sign, meaning he had only 5 miles to go.

But even then, it was a stretch;
he was hobbling 16 to 18 minute miles, on feet that experience ultrarunners told me would have taken them out of the race. He had large blisters on the soles of his feet, and was badly chafed in lots of sensitive areas.


I have never before seen my husband truly suffer, and finish something just by strength of will long after his body said, "time to quit, Baboo."

He voiced complaints that normally only come from me, and so they sounded eerily familiar:

"Why am I still going uphill? It's supposed to be downhill now. When does the downhill start?"


"Everyone is passing me. I'm going to be last."


"I'm not going to make the cutoff."
I'm immensely proud of this man, who I know finished this race out of sheer stubbornness, but I'm not a big fan of doing this again. I cried watching my normally confident husband falter and limp and suffer. I wasn't going to urge him to quit, but I couldn't quite bring myself to encourage him to continue, either; so, instead, I chattered on and on about nothing in particular to keep his mine occupied and off the pain. I asked him what he most wanted when he was done. (Blizzard from DQ, and some granny smith apples).

I could be wrong, but I don't feel like Baboo has the happy feeling of satisfaction that he has when he finishes a triathlon. It's more of a grim feeling of being finally done.

Then there is the residual suffering.

Being off your feet is little relief after something like this. You just hurt, hurt, hurt so much that you can't sleep peacefully, which you so desperately need after 27 hours of being on your feet.

Now, for some reason, Baboo is signed up for the New Mexico marathon in 6 days.

Even if his spirit is willing, his wife isn't. I'm leaving him at home that day (it's this Sunday) with no car keys or front bike tires.